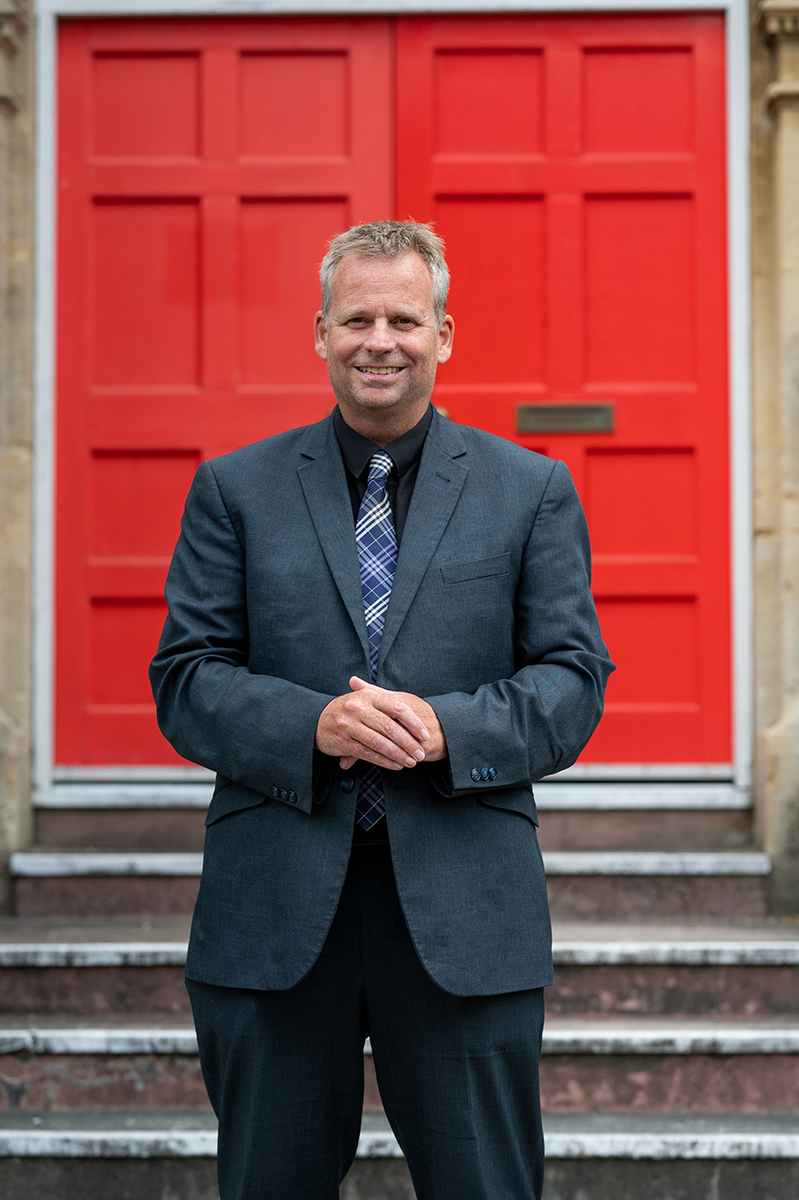 Last Blog for this half term.

Make sure that the half term holiday involves some school work / revision.

Year 13 students and some Year 12 students will be sitting exams in the summer.  Exams are stressful, so you need to help and support yourself and your own wellbeing by preparing early for them.  The most effective revision is done over a long period of time, as this enables you to keep repeating it, burning it into your long term memory.  Plus by preparing early, you will be helping your own mental health and overall wellbeing.

We suggest that all revision notes: flashcards, mindmaps etc. are completed by Easter at the latest, to allow enough time for the repeat, repeat, repeat part of revision in the build up to the exam season.

Medina College students recently performed and recorded their interpretation of Shakespeare’s Twelfth Night for the Shakespeare Schools Film Festival. The performance has received the most incredible review and Mrs Shorrock is extremely proud of all of the students involved.

“Adapting Shakespeare for the screen takes a great deal of creativity, ingenuity and dedication and you demonstrated this in abundance! You should all be feeling extremely proud of your achievements”

You can watch the performance and read the full review below. 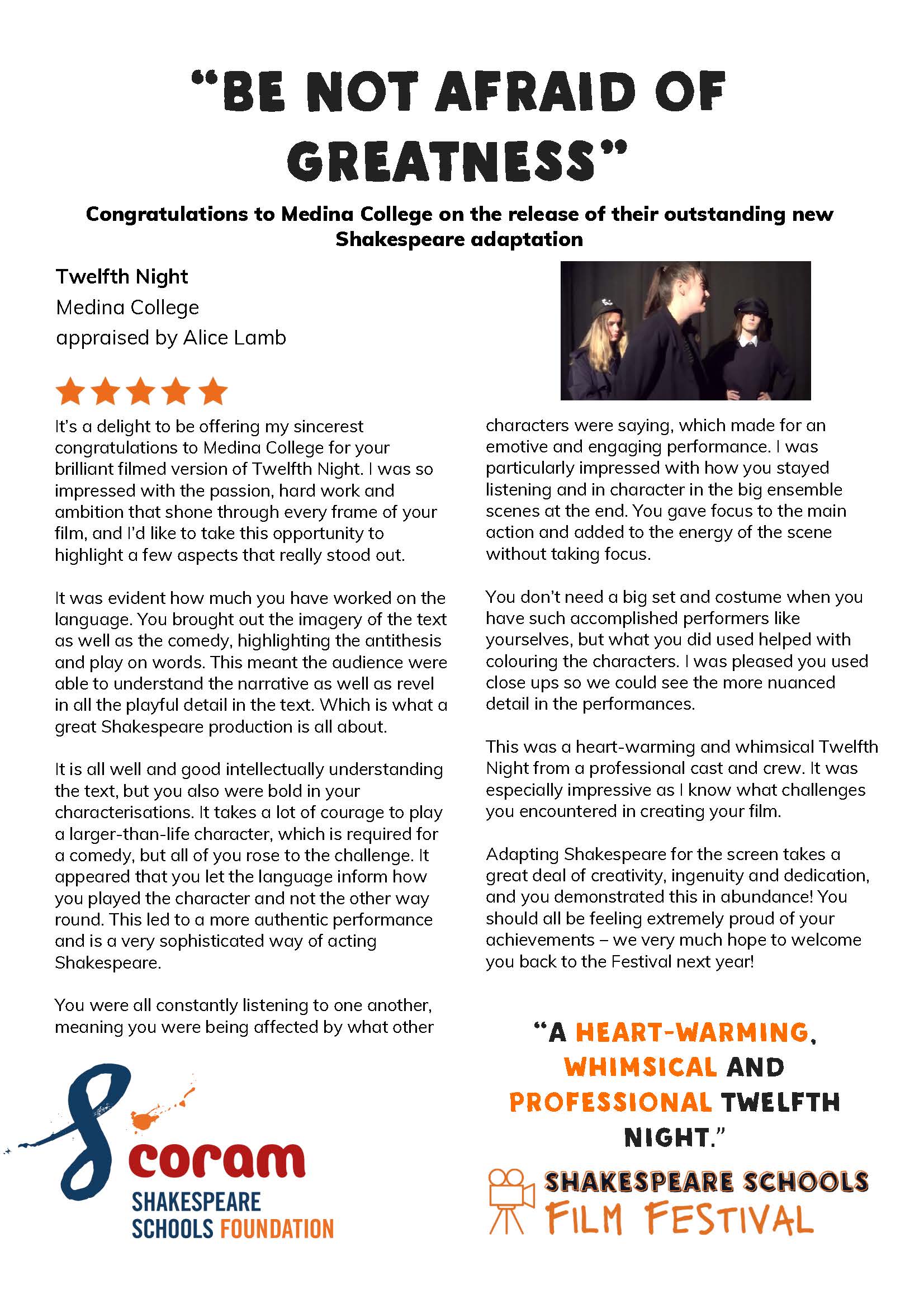 On Wednesday we hosted the Island Schools’ Sports Hall Athletics Championships.
6 of the other high schools came to compete against our year 8 team. The competition was fierce and our team were unlucky in a few events, meaning we finished in 7th place. Congratulations to team for representing Team Medina. A special well done to our group of amazing year 10 sports leaders who, after having led the primary school compeitions for 2 previous events, showed great skills to officiate this event and were again an absolute credit to Medina! 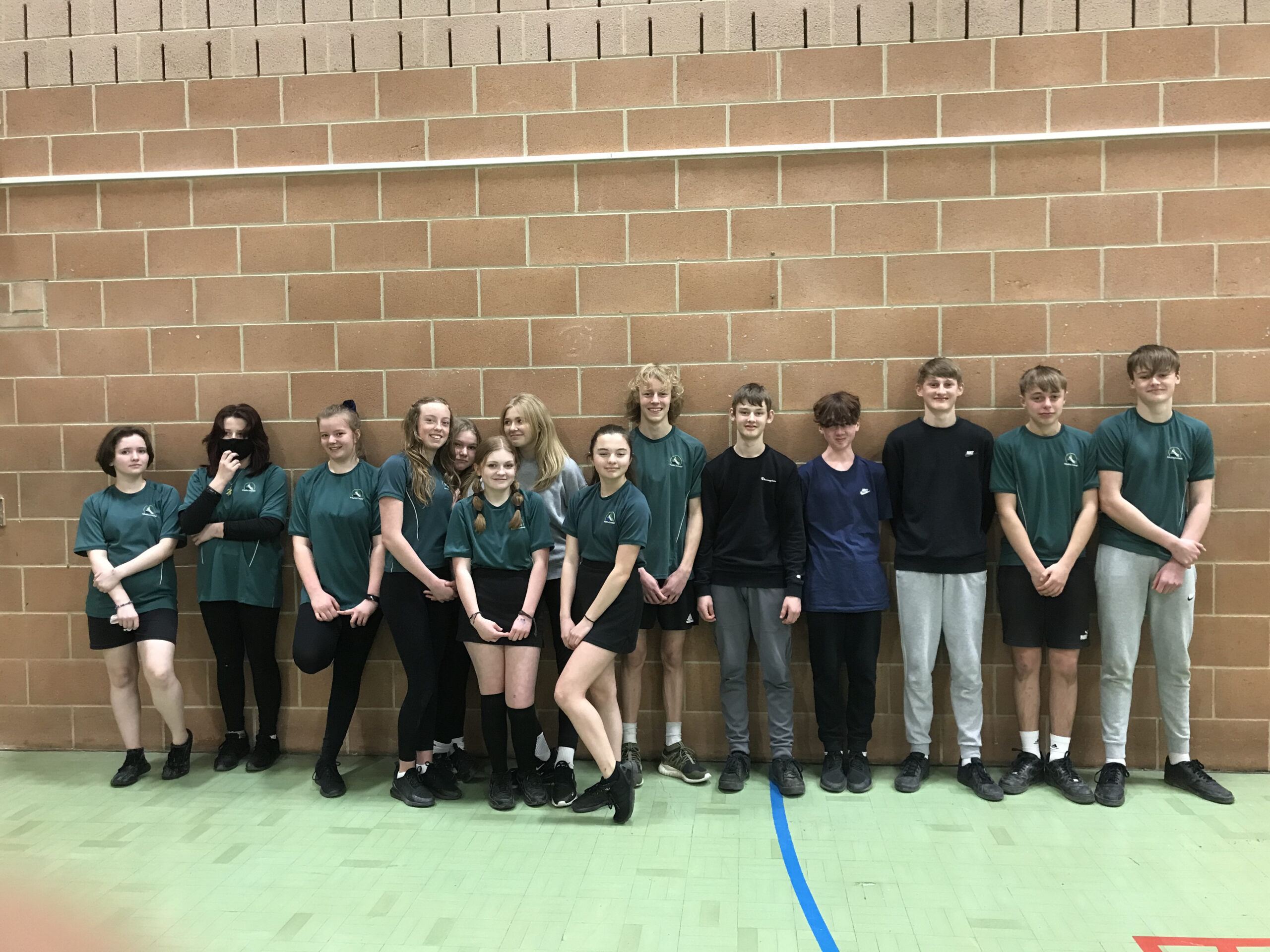 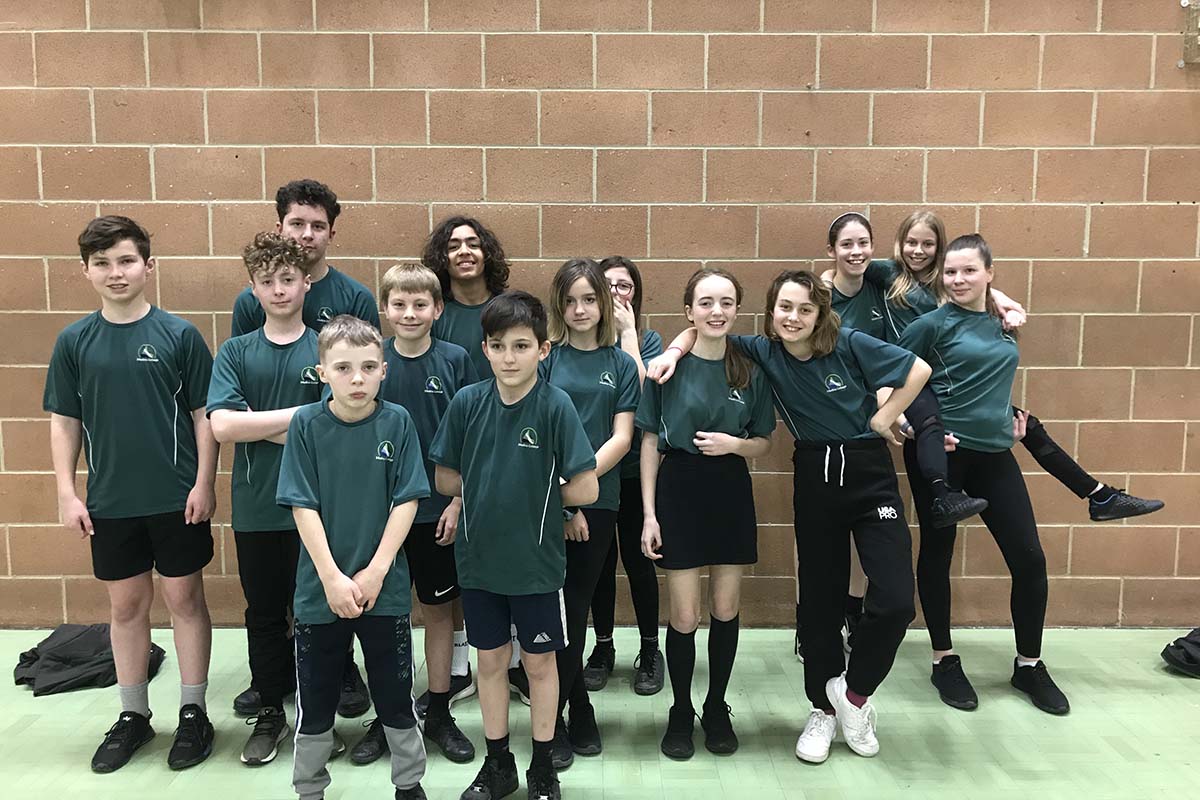 On Wednesday afternoon, a group of year 8 students headed over to Medina to compete in the Island Schools Sports Hall Athletics Competition, whereby our team of 5 boys and 6 girls took on 5 athletic events each.

The students performed well across each field event, with stand out performances in the speed bounce which saw Euan take 1st position with 76 bounces in 30 seconds. Taylor also put in a commendable effort with 68 in the girls competition. In the triple jump Lucy gained a PB with 4.98m and Destiny just behind with 4.88m. In the shot put Freya got 6.30m. Benji and Theo also performed well in the vertical jump coming in the top 5.

On the track events, the boys put in a superb effort on the obstacle race which saw them dominate and this was followed up by excellent performances in the 2 lap race by Euan and Jack with both gaining a 2nd place. Jack also gained a second in the 4 lap race.

Theo also inspired others with his excellent motivational coaching from the sideline and also through his strategic conversations with officials. 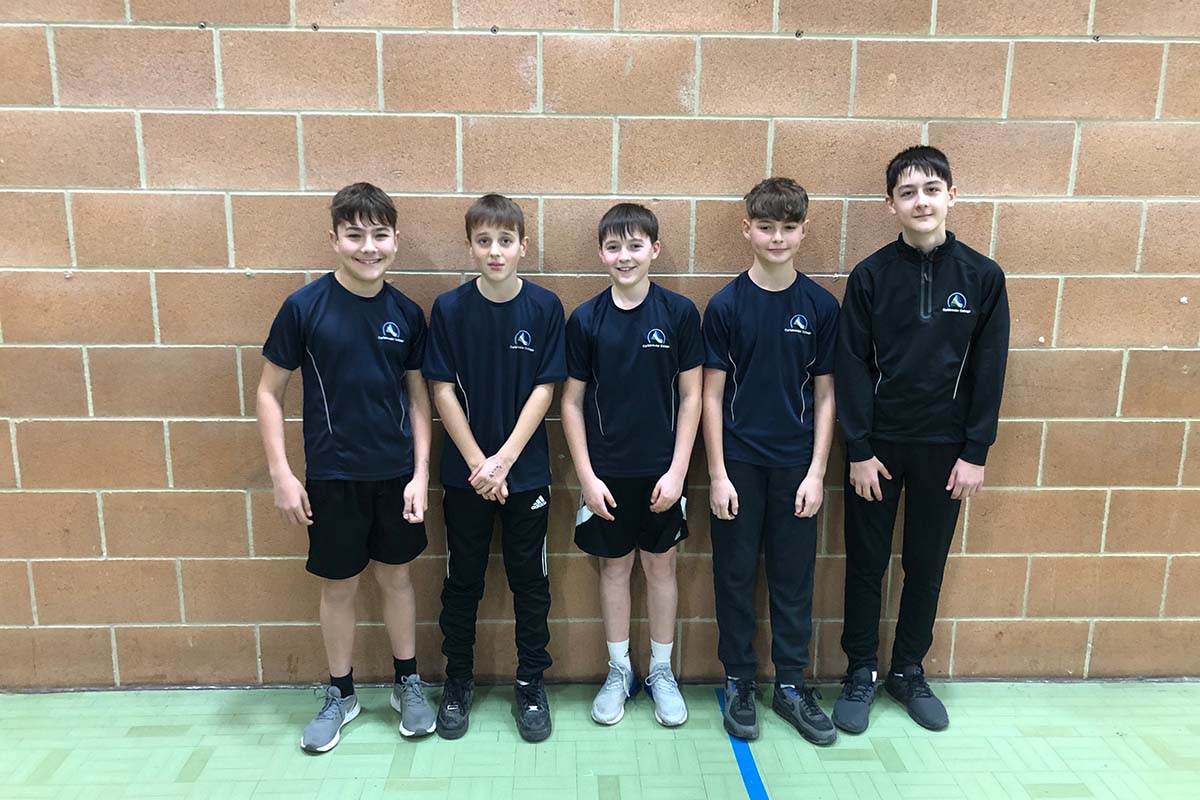 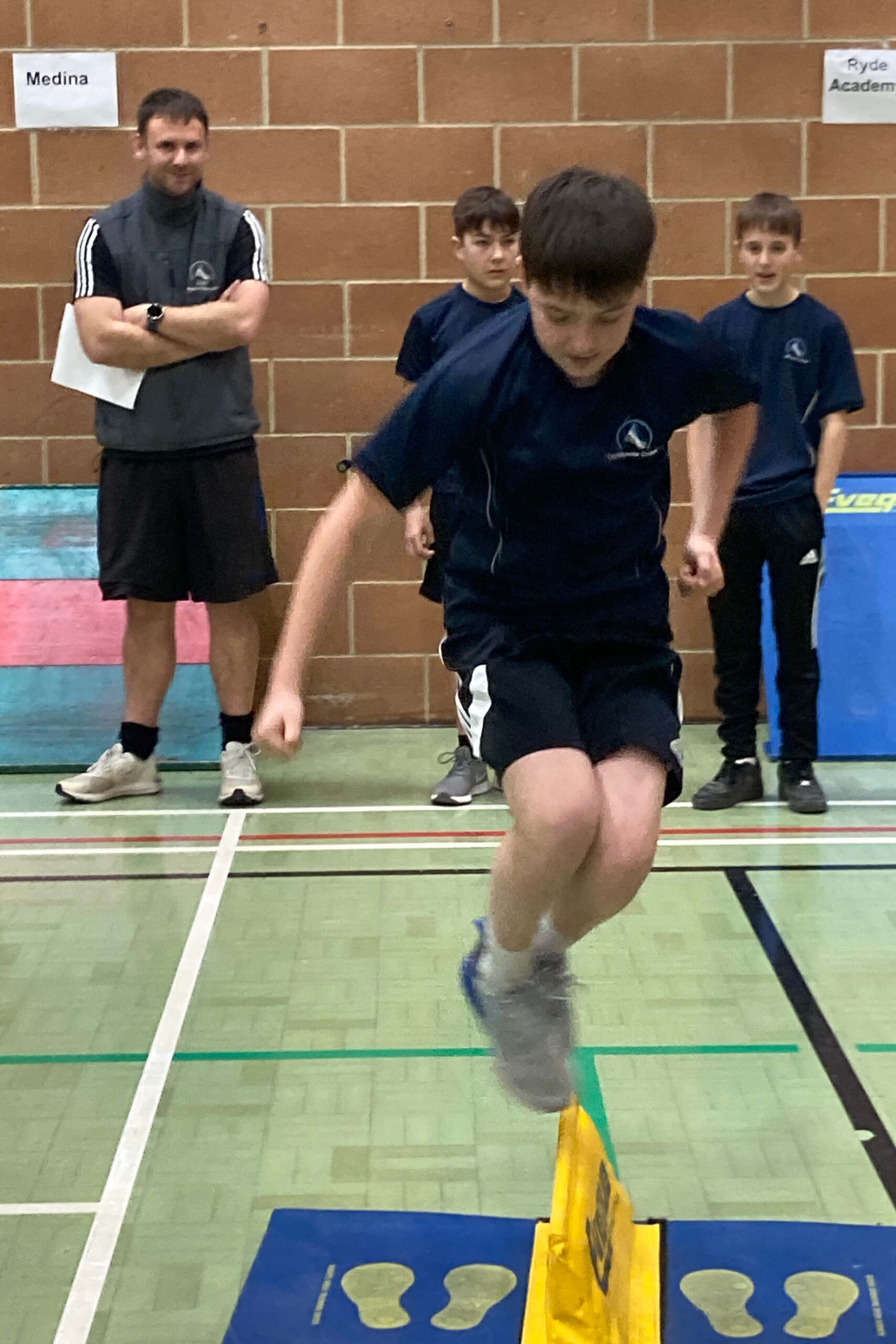 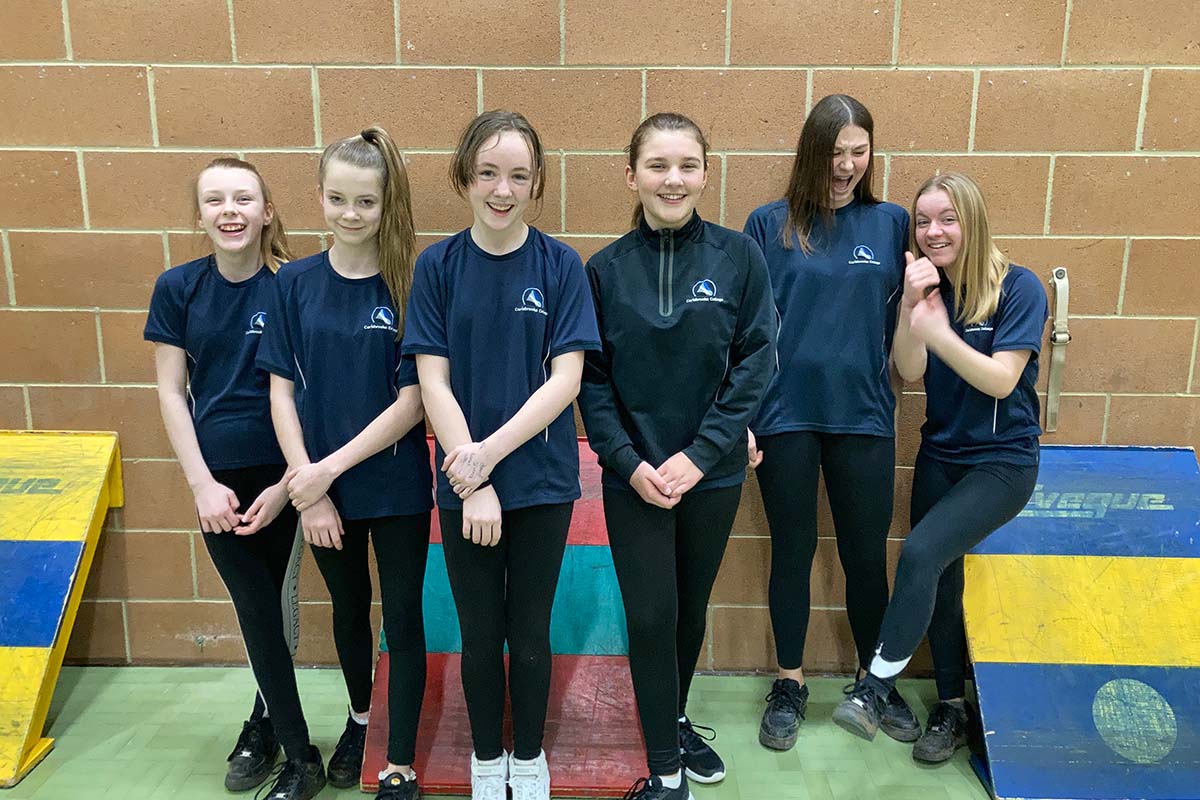 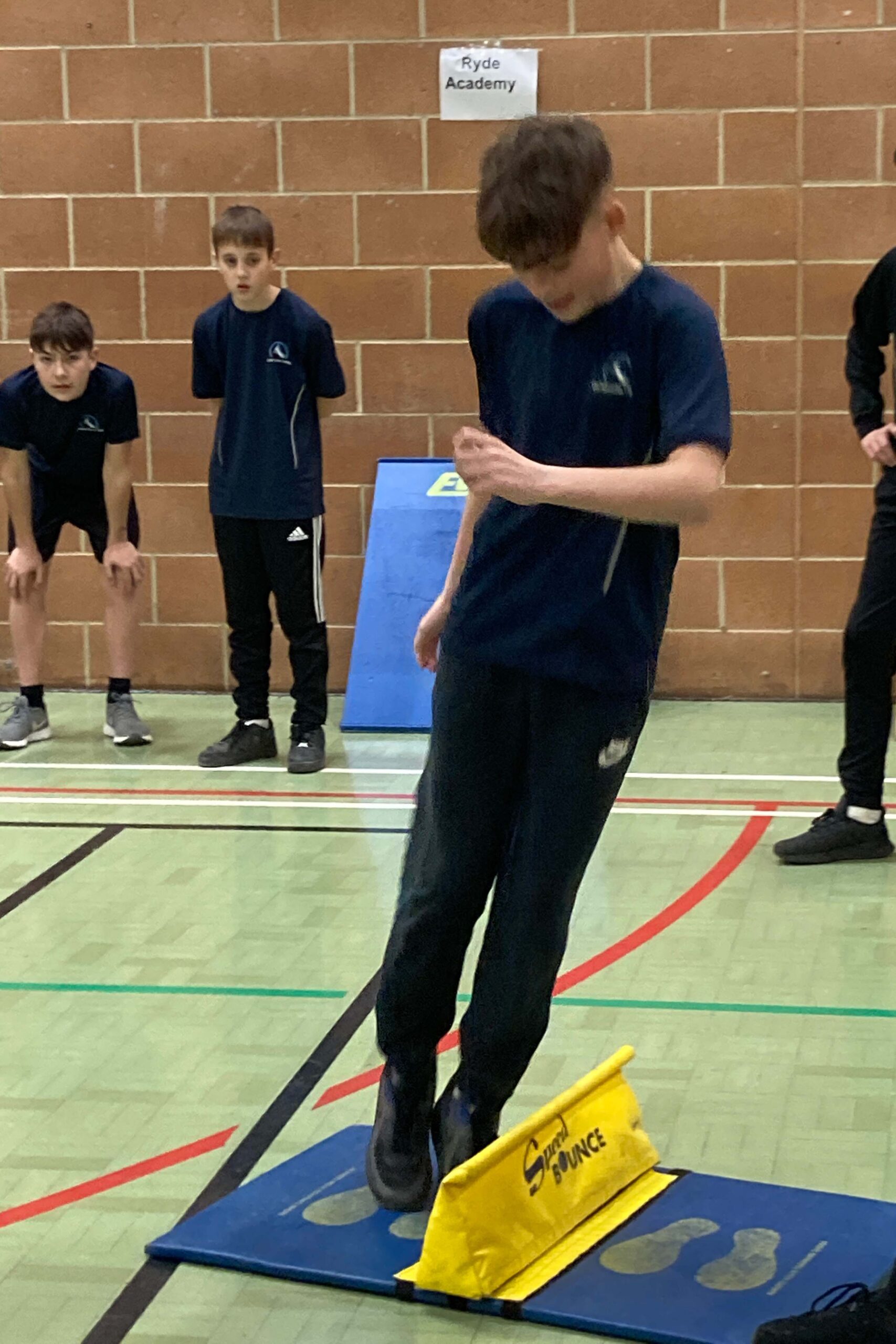 On Thursday 17th February, it was the annual Indoor Rowing Championship at The Bay Secondary School. This is the 9th year straight that Carisbrooke have been part of this. They previously came 6th in 2013 followed by third in 2014 and back to back runners up positions in 2015 and 2016. In 2017 the Carisbrooke Blades were crowned champions and became the first school to take the championship away from The Bay who have always dominated the event. In 2018, Carisbrooke went back to runners up and in 2019 came in third followed by 4th place overall in the last event in 2020. Therefore, the Carisbrooke side were ready to start a new era and were aiming for a top three spot this year. On the day a few last minute changes occurred to the roster which couldn’t be helped but the team still managed to put in some excellent performances and whilst they finished 4th overall slightly below target they did themselves and the school proud.

Every student who took part for Carisbrooke pushed themselves to the limit in this very intense and exposed situation and this demonstrates a real brilliance physically and strength mentally. Both Mr Fleming and Mr Peake are very proud of them all. 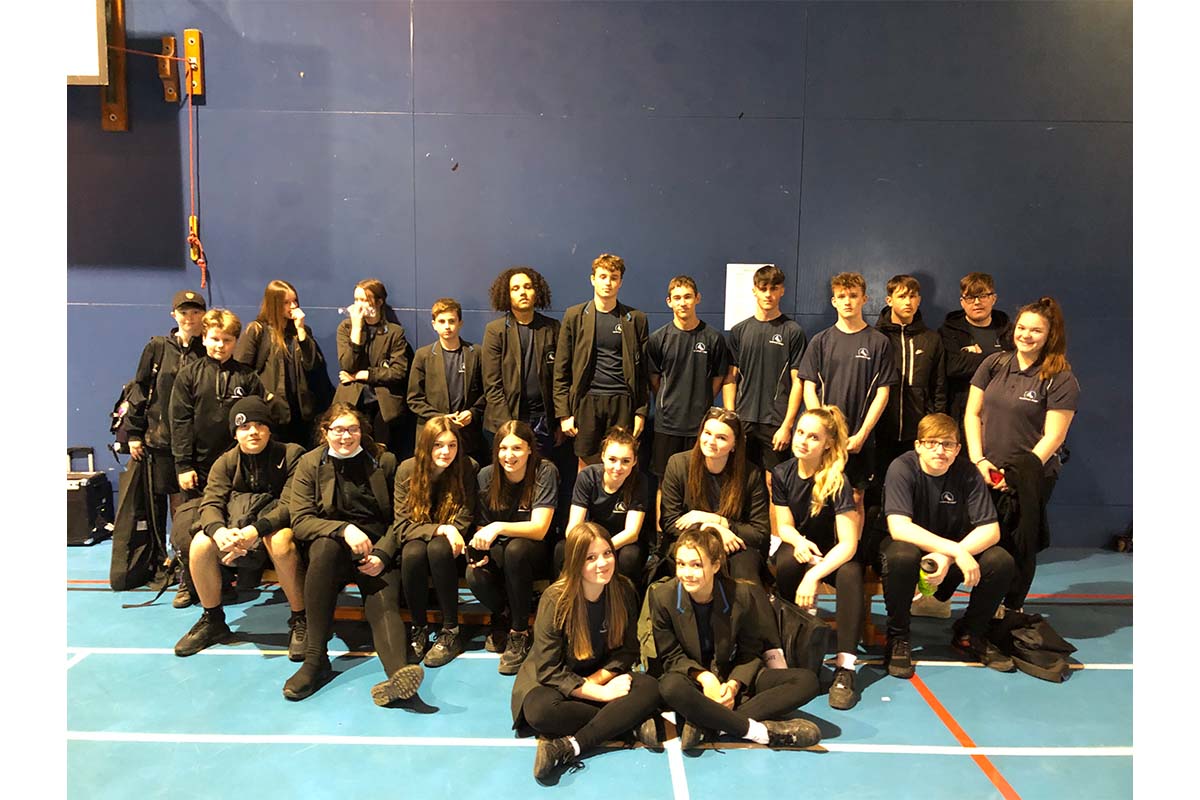 Year 12 Geographers have been learning about urban regeneration and how sports, market and arts can be used to lead regeneration.  As part of this work, we visited Independent Arts at the Creative Hub in Newport High Street to learn about how the arts are being used to regenerate and revive interest in the town centre.

Students brought in their own photos of Newport in need of regeneration or Newport regenerated and with the help of creatives, Peta, Hannah and Trudy, students created a monoprint in ink.

The art helped students to look at Newport in a new light and understand how the arts can be used in small-scale grassroots regeneration.

Dylan said,” Newport is in need of regeneration because of the abandoned buildings.”
Jamie said ” the Creative Hub adds a sense of community to a place that needs it”.

Many thanks to Independent Arts for such a wonderful afternoon.
Mrs Allen.

On Wednesday, Year 11 held a cake sale to raise funds for their prom. All  202 cakes were made in school the night before by students on the prom committee. The cake sale was a huge success with over £100 being raised towards the prom. Well done Year 11. 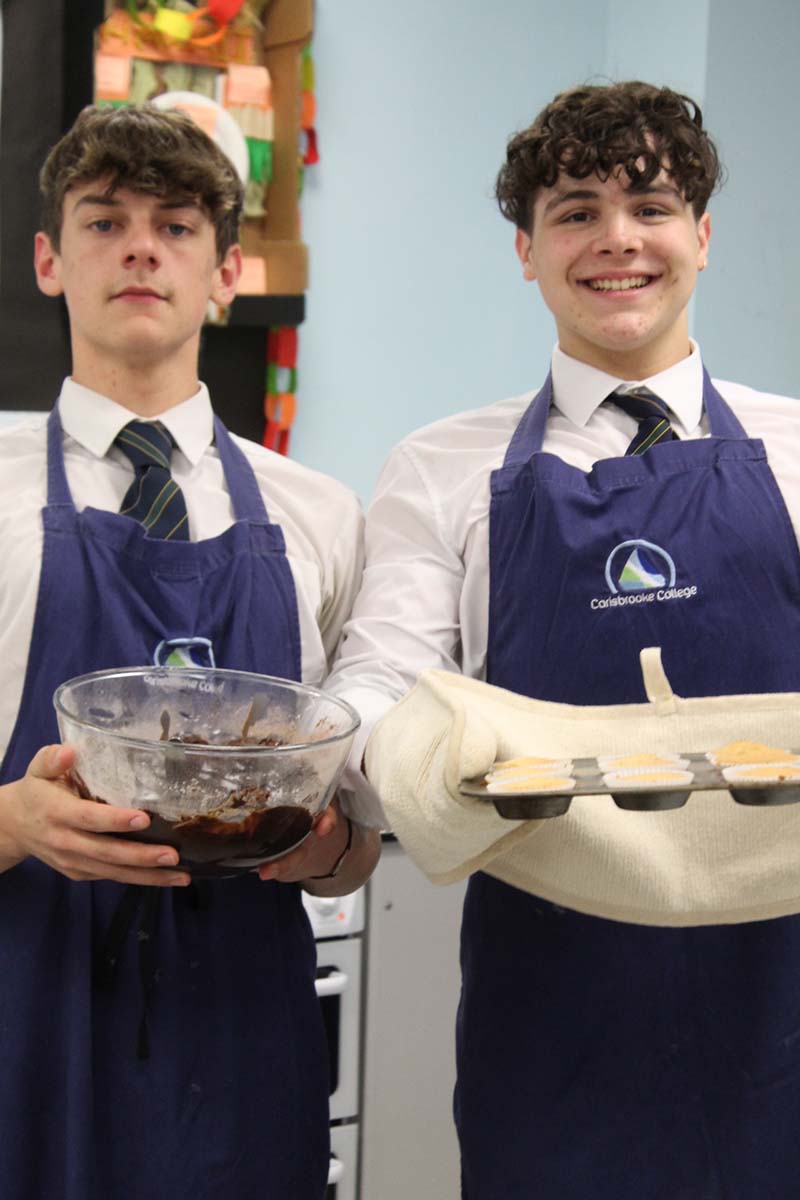 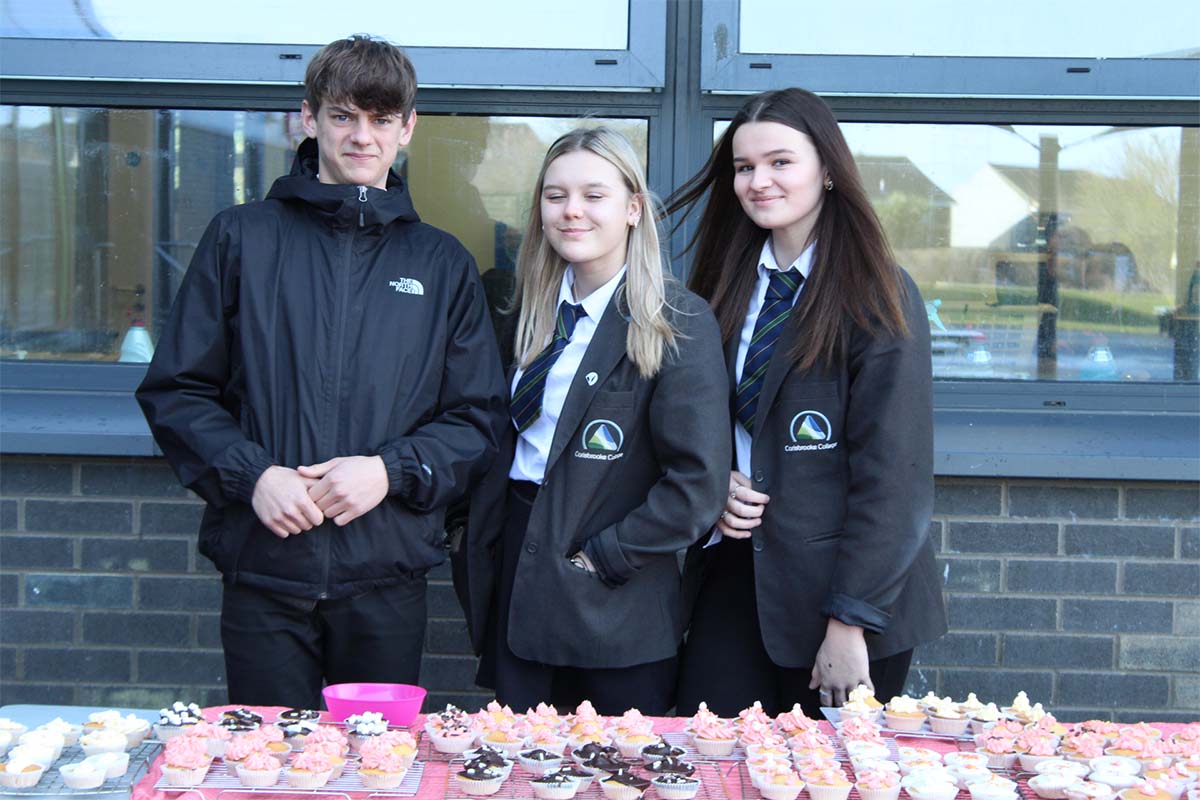 The Girls’ Network are a charity for girls, shaped by women. They believe that no girl should have their future limited by their gender, background or parental income. Every year they support more than 1200 girls across the country.

The Girls’ Network have chosen Medina College to offer a pilot online mentoring programme to. This is a fantastic opportunity and is completely free. Students who take part will be introduced to a mentor and a network of role models who are women.

Take a look at their website to find out more: The Girls’ Network

Students wishing to take part should complete this form by Thursday 5 May 2022. 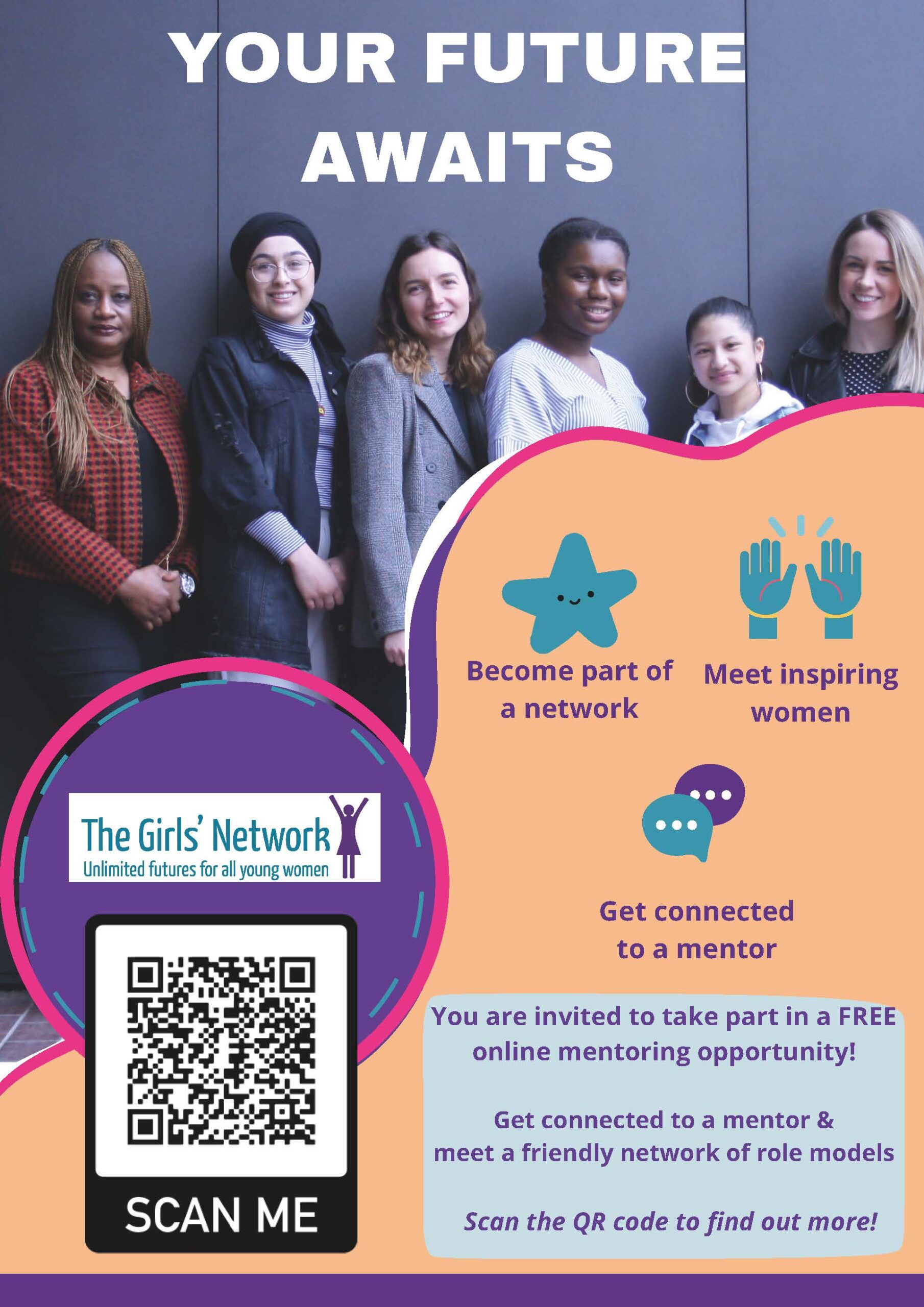 Visit to the University of Bath

Visit to the University of Bath

Yesterday saw our Year 12 & 13 BTEC and A Level PE students travel to the University of Bath.

Throughout the day, students took part in a VO2 Max test, a Wingate Fitness test and a practical session based on plyometrics, speed, quickness and agility. They were also given a tour of the world class sporting facilities where they witnessed a number of the GB rowing squad in training and had a Q&A with an ex-student who is working towards her Olympic rowing dream.

Students were a pleasure to take and a credit to The Island VI Form. Thank you to Mrs Tuck for her incredible driving skills!

During the day, the delegates discussed a range of important global, social, political and economic issues, ranging from gun rights to the use of torture and the status of Northern Ireland. At the end of the day, all delegates had an opportunity to take part in the General Assembly crisis event simulating a Chinese invasion of Taiwan. Finally, awards were given out in numerous categories. Joe and Isaac both received ‘Best Delegate’ awards for their particular contributions, whilst the VI Form team representing Brazil were awarded the prestigious Best Delegation Award.

Thank you to Ryde School for hosting a fun and informative event for all who took part. 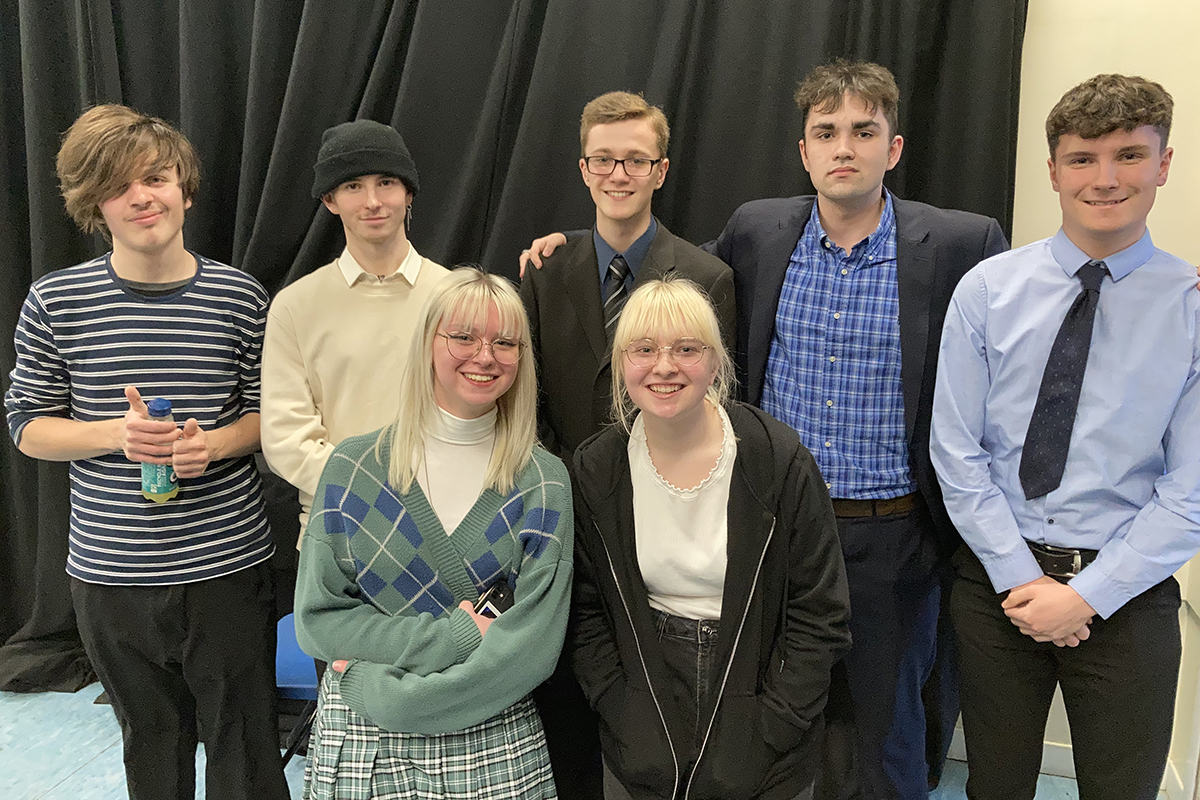 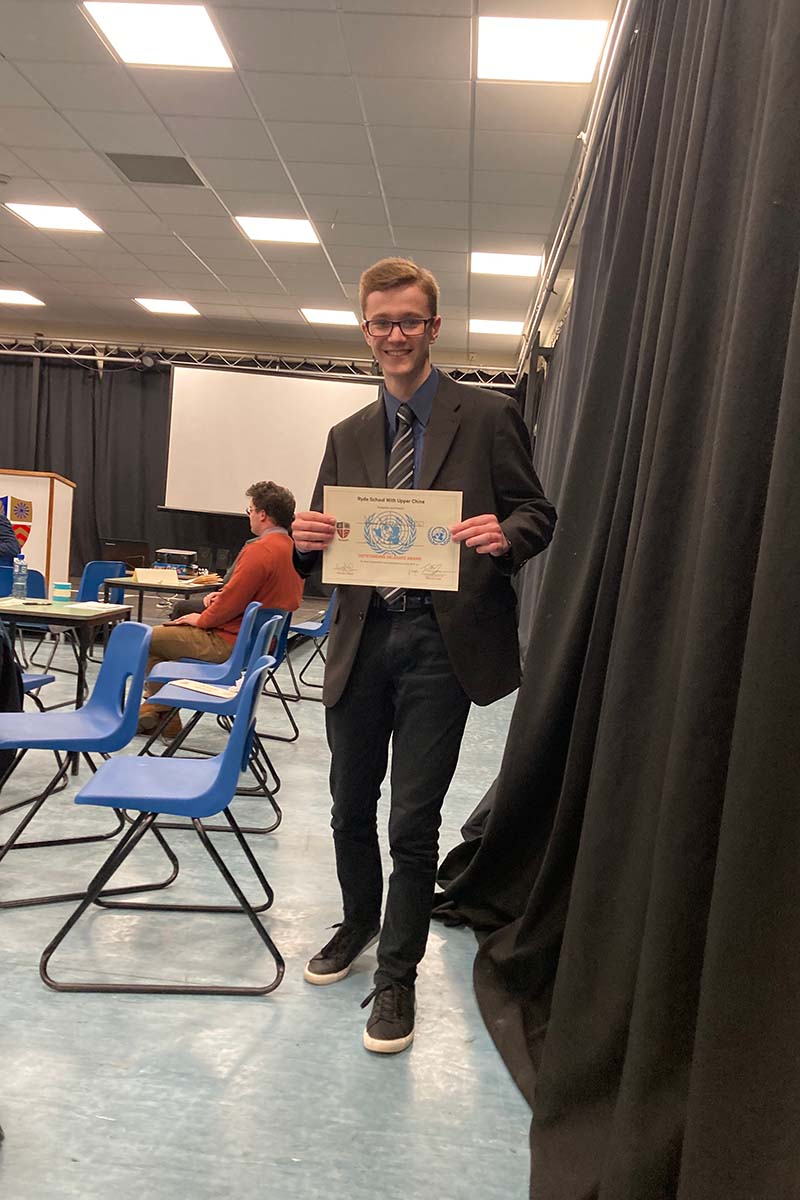 Isaac with his ‘Best Delegate’ award. 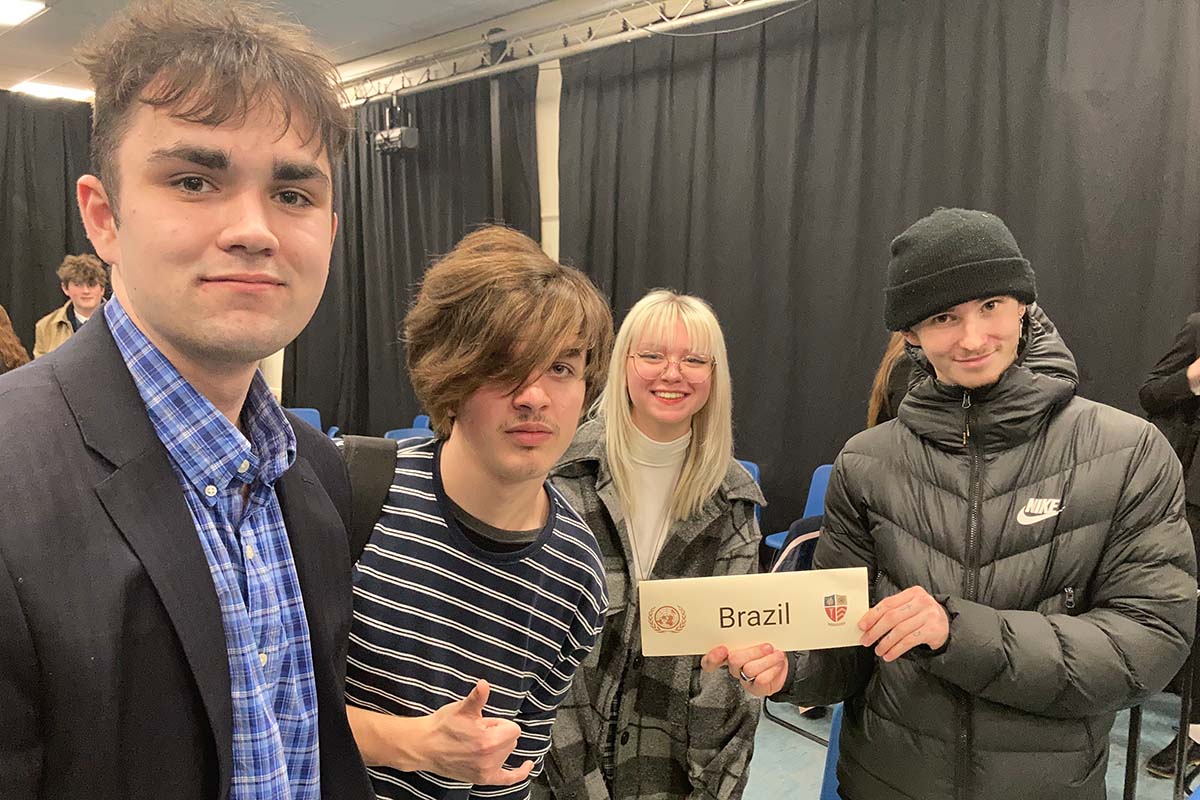 No comments to show.

The Isle of Wight Education Federation